George Milad has 30+ years of experience in PWB manufacturing and is the national accounts manager for technology at Uyemura International Corporation. He holds a master’s degree in physical organic chemistry from the American University in Washington, D.C., 1979, is the author of the chapters on plating and surface finishing in _Printed Circuits Handbook: Seventh Edition_, and has a series of publications on electrolytic plating and metallic surface finishes. George is the recipient of the 2009 IPC President’s Award, chairs the IPC Plating Committee, and is a permanent member of the IPC Technical Activities Executive Committee.

Plating or metal deposition is a key component in the manufacturing of electronic packages (circuit boards and integrated circuits). Plating occurs when a metal ion in solution (electrolyte) is reduced to the metal. The reduction takes place when electrons are supplied to the ion:

The source of electrons differs with the type of plating as follows:

This column will be dedicated to the immersion reaction.

Immersion reactions occur between metals according to their location in the electromotive (EMF) series. The EMF series is a listing of the elements according to their half potentials or tendency to lose electrons (get oxidized), or their tendency to gain an electron (get reduced), measured in voltage. Elements that lose electrons (reducers) have negative voltage values, and elements that gain electrons (oxidizers) have positive Eo voltage values. 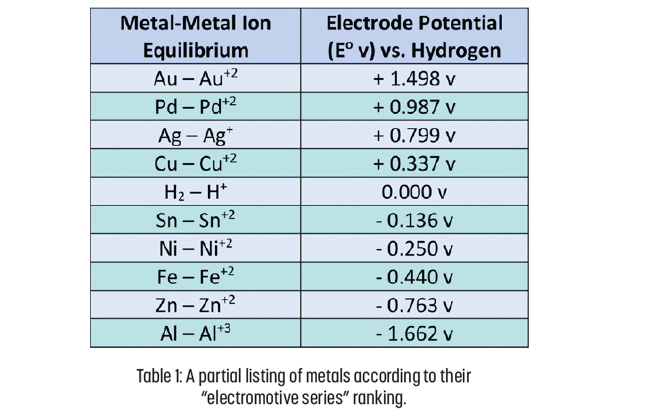 Table 1 shows the half potentials Eo measured in volts of common elements, and metals are ranked with respect to their inherent reactivity. The metals located at the top of the series are considered the noblest with the highest level of positive electrochemical potential.

The electromotive force that drives an immersion reaction is determined by the difference in Eo (half potential) between the reduced and oxidized elements. The reduced element is the element receiving electrons and is derived as follows:

If the cell potential is positive, the reaction is spontaneous. A negative voltage indicates that no reaction will take place.

Immersion Gold in ENIG
The deposition of gold on the electroless nickel substrate is an immersion reaction. The presence of nickel metal in an electrolyte containing gold ions creates a spontaneous deposition reaction. The EMF of the cell comes up to + 1.75 v, and the difference between the half potentials of gold +1.5 v (reduced species) and nickel –0.25 v (oxidized species) can be expressed as follows.
ENIG reaction:

Corrosion in ENIG
Corrosion may occur when the electrons released by the oxidation of nickel reduces the hydrogen ion present in solution releasing hydrogen gas. The EMF of the cell is + 0.25 v and is the difference between the half potentials of hydrogen (0.00 v) and nickel (–0.25 v).

The EMF driving force for this reaction is only 14% of the EMF for the gold deposition reaction and would only occur if the availability of the gold ion is interfered with. An example would be localized areas (crevices) where gold is depleted.

Nickel corrosion can be mitigated by:

In this galvanic cell, the gold is the reduced species, and the palladium is the oxidized species. Comparing the EMF of this cell to the EMF of the nickel/gold cell, it is clear that this reaction is less driven and would proceed slower than the deposition of gold on nickel. This creates a problem if the underlying nickel is accessible to the gold electrolyte. In this case, the gold would exchange with the nickel layer under the palladium and nickel corrosion would occur. For mitigation of nickel corrosion, refer to my previous column titled Can ‘Nickel Corrosion’ Occur In ENEPIG?

Palladium Catalyst on Copper
For an immersion palladium on copper reaction:

The uniformity of the palladium catalyst layer is critical. The uniformity depends on the pre-treatment of the copper surface, which must be free of oxidation or any contaminants. An uneven palladium distribution would lead to uneven EN initiation, generating crevices in the EN deposit, which are potential sites for nickel corrosion.

The driving force for this reaction is + 0.46 v and would proceed spontaneously. Although the reaction is straight forward, the design of the electrolyte for immersion silver is a differentiating point from one supplier to the other and may include anti-tarnish components.

Replacement reaction between Cu and Sn2+ cannot occur in a standard electrolyte because the EMF voltage is negative (- 0.48 v). The half potential of Cu is + 0.337 v, which is much higher than that of Sn is – 0.136 v.

In the presence of thiourea, the EMF for the immersion reaction is positive and would proceed spontaneously:

A good understanding of the principles of immersion plating goes a long way in eliminating costly defects that may occur during fabrication. It is a powerful tool in analyzing failure, as well as the subsequent assignable cause, and recommending corrective action.

This column originally appeared in the September 2020 issue of PCB007 Magazine.

Plating or metal deposition is a key component in the manufacturing of electronic packages (circuit boards and integrated circuits). Plating occurs when a metal ion in solution (electrolyte) is reduced to the metal. The reduction takes place when electrons are supplied to the ion. George Milad dedicates this column to the immersion reaction.

All PCB materials have both conduction and dielectric RF signal losses. In this column, George Milad highlights resistive conduction losses by the copper layer used in the board.

The Plating Forum: Can ‘Nickel Corrosion’ Occur in ENEPIG?

Nickel palladium gold (ENEPIG) surface finish is being referred to as the “universal finish.” ENEPIG was also the answer to the nickel corrosion “black pad” encountered occasionally with electroless nickel/immersion gold (ENIG) deposits. In this column, George Milad answers the question, "Can 'nickel corrosion' occur in ENEPIG?"

Acid copper plating in most shops is done in vertical plating tanks. Acid copper solutions are not dumped but are continuously used with occasional carbon treatment to remove organic build-up from the additives and from dry film leaching. George Milad explains.

In recent years, electronic devices, such as smartphones and tablet PCs, have been miniaturized. Chip-size package (CSP) used inside the electronic devices have been miniaturized as well, and the spacing between the lines continues to diminish every year. Some of the latest packages have spacing as little as 15 µm or less. If electroless nickel electroless palladium immersion gold (ENEPIG) is used with an EN thickness of 5–6 µm, only 5 µm of spacing would be left, increasing the risk of shorts between the traces. George Milad explains.

ENIG has been around the printed circuit industry for more than 25 years. George Milad provides an update and explains how although the occurrence of corrosion was recognized, a better understanding of the defect has led to a series of improvements over time.

George Milad's columns will cover PCB plating, IPC specifications, and more. In this debut installment, he gives us an update on the IPC-4552 ENIG specification, including Revision A and B.

The IPC-4552 ENIG specification was written in 2002, but the committee is currently updating and revising the document. The thickness of the immersion gold layer is being revised with the intent of reducing the minimum thickness from 2.0 µin to 1.6 µin. A series of studies were conducted to find out if this reduction is possible.

ENIG continues to gain market share due to its versatility in a wide range of component assembly methods including solder fusing, wave soldering, and wire bonding. The plating of ENIG is a complex multi-step process. Each process step is carefully designed and must be well understood and controlled to produce the desired end product. George Milad reports.

Acid Copper Plating for High Aspect Ratio and Via Fill

To meet new specification requirements, board shops are forced to seek new and advanced processes in every department. Acid copper plating comes under heavy scrutiny, as it is the process that forms the traces and the through-hole connectivity that conveys the signal from end-to-end of the final device. George Milad, a new columnist for The PCB Magazine, explains.